In addition to the 14 battleships and cruisers in the last post, the Russian Pacific fleet also had an independent cruiser squadron based at Vladivostok ("Rule the East" in Russian).  This squadron was tasked with interrupting the Japanese maritime traffic across the Sea of Japan between the Home Islands and Korea.  They were moderately successful.  In August 1904, the squadron (minus one cruiser, see below) sailed to attempt to assist the transit of the main Pacific fleet from Port Arthur to Vladivostok.  Of course they were too late, encountering Japanese cruisers at the Battle of Ulsan (14 August 1904) where they lost one of the three and were forced to turn back to Vladivostok.

The color scheme is my interpretation of their olive drab hull and khaki upperworks.  As usual, please click on the pictures for a larger image.

Added Note:  All ships are from Panzerschiffe Miniatures.  The number after the ship name is the catalog number. 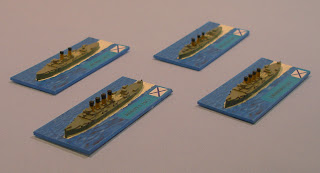 The four cruisers of the Independent Cruiser Squadron, consisting of the:

armored cruiser Rurik [A-307], which was sunk at the Battle of Ulsan, and

protected cruiser Bogatyr [A-303].
The only information I've been able to determine about her fate is that she was wrecked near Vladivostok and blown up to prevent capture.


Correction:  A correspondent on the Pre-Dreadnought Yahoo Group informed me that  I (unfortunately) overlooked the "small" fact that Bogatyr survived to serve in the Baltic and be scrapped in 1922.  OOPS on me!  The information on being blown up came from two contemporary New York Times reports of late May 1904.  Another correspondent has found a report that Bogatyr was refitting in Vladivostok at the time of the action off Ulsan.  This might have resulted from a grounding on rocks requiring extensive hull repairs which could have prevented Bogatyr from joining the squadron off Ulsan.
This post completes the Russian Pacific fleet (or 1st Pacific Squadron as it was later called), except for the destroyers.  I'm still working on them.
Posted by ColCampbell50 at 1:18 PM

According to the article referenced below, the squadron sailed "minus the Bogatyr which was being refitted":

And again, the squadron looks good.