As I posted yesterday, I completed six of the Baltic Fleet battleships that sailed to the Pacific, only to die at Tsu-shima.  Today I present them, starting with the four brand-new battleships of the Borodino class, which were hurried into completion and for which Admiral Rozhdestvenski was forced to wait before he could sail.  Of course if he had sailed earlier with only the smaller number of capitol ships, the big question would have been could he have arrived near the Japanese home islands before Admiral Togo could repair his ships that were damaged in the Battle of the Yellow Sea by the Russian 1st Pacific Squadron?  An interesting speculation, no doubt!

These are all Panzerschiffe Miniatures models.  Please click on the pictures for a larger image.

The 1st Battle Division, consisting of: 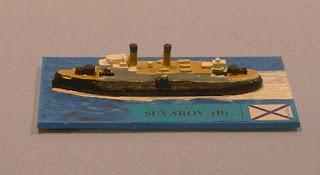 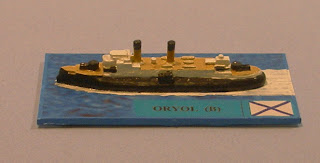 battleship Oryol (Eagle).
Of these four battleships, only the Oryol survived the battle but was captured by the Japanese.  The other three were sunk in the action.
Additionally, I completed two older battleships, which were part of the 2nd Battle Division.  In addition to the Oslyabya, which was pictured earlier, and the Admiral Nakhimov, an armored cruiser, which hasn't been painted yet, the 2nd Battle Division consisted of:

Battleship Navarin, with her four funnels in a square, was the second oldest battleship in the 2nd/3rd Pacific Squadrons.  She was sunk at Tsu-shima.