During the Russo-Japanese War, the Japanese had the advantage of operating in their own backyard, so to speak.  As such, they were able to concentrate their naval power more effectively that the Russians.  This is also reflected in my painting of the Japanese fleet.  Posted below are the Japanese ships which I believe, from all the evidence I can locate both in books and on-line, actively participated in the two August 1904 naval battles -- Yellow Sea on August 10 and Ulsan on August 14.

Except for one model, all ships are from Panzerschiffe Miniatures.  The number after each ship's name is the catalog number.

They are painted in my interpretation of the Japanese war color scheme -- pewter gray hulls, turrets, upperworks, and funnels and wooden decks.  As usual, please click on the picture for a larger image.

From the information that I can develop, the Japanese fleet was organized into three squadrons, each of several battle divisions and accompanying destroyers and/or torpedo boats.  During these August battles, several of the squadrons were broken up and used either in a patrol line or as separate ships with other divisions.  I've tried to reflect this in my order of battle, but any errors are in my interpretation of the evidence.

The main fighting component was the 1st Squadron commanded directly by Admiral Togo, who also commanded the 1st Battle Division: 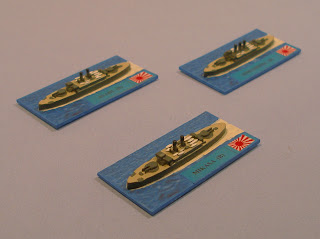 The "1st Sub-Division" consists of: 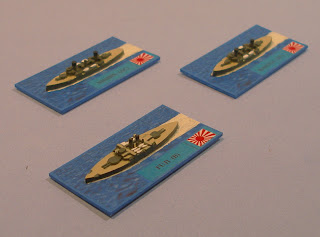 The "2nd Sub-Division" consists of:

Armored Cruiser Niishin [L-325].
These two armored cruisers were assigned to the 1st Battle Division to replace two battleships which were sunk earlier by Russian mines. 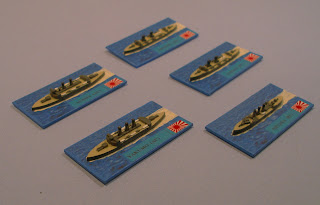 The 3rd Division, commanded by Admiral Dewa, was also in the 1st Squadron and consisted of: 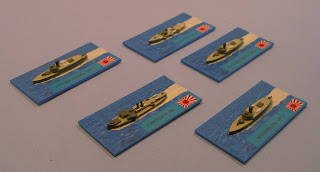 The 1st Division was supported by the obsolescent ships of the 3rd Squadron's 5th Division consisting of:

Protected Cruiser Matshushima [L-338].
{Model is inaccurate as the main gun turret was mounted and faced to the rear.}

And the attached Protected Cruiser Chiyoda [L-358].
There were also three ships that were sunk earlier in 1904 that were part of the main battle fleet. 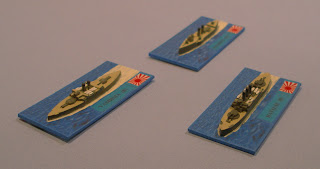 These sunken ships were: 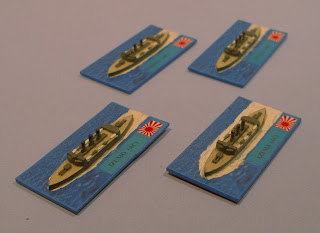 The 2nd Division consisted of: 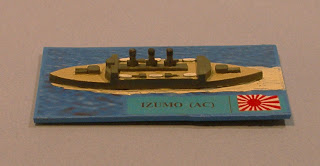 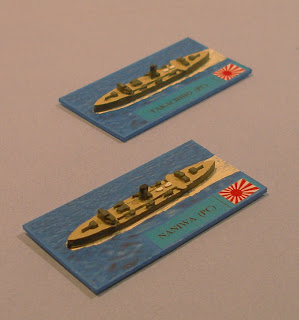 Two of the 4th Division's cruisers were also part of VAdm Kamimura's force: 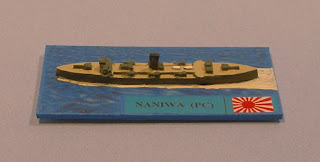 Protected Cruiser Takachiho [L-354].
And finally, as far as I can determine, there were five protected cruisers (Akashi, Suma, Takasago, Izumi, and Akitshushima) which were either in the patrol lines or were supporting the Japanese Army's advance towards Port Arthur.  Two other protected cruisers (Tsushima and Otowa) were not yet commissioned, not joining the fleet until late 1904/early 1905.  All seven are currently being painted and pictures will be posted soon.
Posted by ColCampbell50 at 6:11 PM

These look great, Jim. But just so others know, the Chin Yen is also available from Panzerschiffe.