In early 1904, troubled by increasing tensions, the Russian navy dispatched reinforcements from the Baltic Fleet to Port Arthur.  These ships, under the command of Admiral Virenius, only reached as far as the Red Sea and Djibouti before they were ordered back home after war broke out.  They made it back to the Baltic just in time to turn around and sail back with the 2nd and 3rd Pacific Squadrons to defeat at Tsu-Shima.

The color scheme is my interpretation of the Baltic Fleet's "lamp black" (in this case charcoal) hulls, white upper works, wooden decks, and ochre funnels.  As usual, please click on the pictures for a larger image.


Added Note:  All ships are from Panzerschiffe Miniatures.  The number after the ship name is the catalog number. 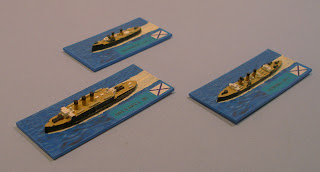 This early reinforcement squadron consisted of the:

battleship Oslyabya [A-301] (her two sisters were already at Port Arthur),

famous (or infamous from your point of view) protected cruiser Aurora [A-304] (her two sisters were also at Port Arthur).  The Aurora was the only one of the these three ships to survive the Battle of Tsu-Shima.
I decided to go ahead and paint these three ships (and their accompanying destroyers) to use them in a "what if?" scenario in early December that will pit the full-strength and reinforced 1st Pacific Squadron against the full-strength (at the time) Japanese battle squadrons.
Posted by ColCampbell50 at 1:30 PM

Very nice work. Panzerschiffe are underrated models, and a great value for the money.