At our first 1:2400 pre-dreadnought game (Battle of the Yellow Sea), it was quickly apparent that I needed some way of marking which ship was firing at which other ship.  In our WW2 1:1200 naval games, Lord Sterling used two different sized golf tees, suitably painted and marked, as indicators.  But golf tees would be much too big for the 1:2400 ships I use.  Not having a plethora of funds to order the very nice shall splashes from Litko, I decided to make my own.  As I was constrained by time, both the immediacy of the next game and the fact that I'm having to take care of my dear wife, who broke her left leg on Veterans' Day and can't put any weight on it, I went for the easiest solution -- two different sized of flat-headed wood screws glued to some blank board game counters and suitably painted.  I numbered each marker, pairing one large and one small for those ships (battleships, armored cruisers, and a few protected cruisers) who had both main battery and secondary battery guns, resulting in 48 pairs and another 30+ singletons for the smaller gunned cruisers.  They worked very well.  You can see them in action in our fictional Battle of the Sea of Japan game. 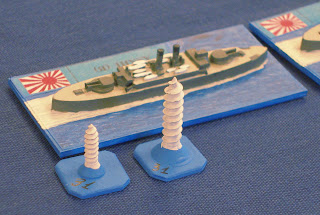 Here, the main and secondary batteries from a Russian armored cruiser target a Japanese battleship.
One caution - please dull the points of the screws.  I didn't and several of us, me included, stabbed ourselves during the game!
Later on I plan on adding some sort of filler to the screws to make them look more like water splashes.
Posted by ColCampbell50 at 2:53 PM

You could colour the splashes as well. As I understand dye was added so that when a shell missed and the spout formed, it would have a shade or colour. It was a way of recognising whose splash was whose when the battle lines were drawn.