With the Russo-Japanese War fleets finally finished and a game under my belt (see the Jackson Gamers' blog sometime later today for a report), I wanted to show my "fleet anchorage" or where all these little ships reside when they aren't "afloat" on the wargames table.

The box is an old, no longer usable archival box that was being discarded some years ago.  But it is imminently suitable to store wargaming figures.  It measures 15" x 10" x 3".  I glued some magnetic sheeting from a local sign store into the bottom and then cut two upper "floors" to take advantage of the smallness of the ships.  The upper floors have magnetic tape affixed to them as moorings for the ships.  The Russian battleships and cruisers occupy the lower level; Japanese battleships and cruisers the middle level; and both sides destroyers and, eventually, merchant ships the upper.  All the ships fit with plenty of extra room on the top level. 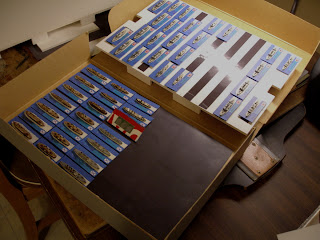 Part of the Russian fleet on the lower level.  One ship is turned upside down so you can see the metal base I glued to the plastic ship base to provide heft and a mooring for the ship. 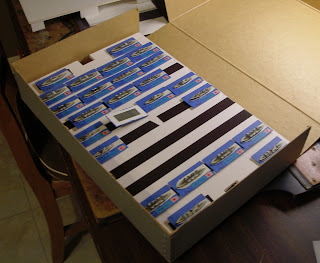 Here part of the Japanese fleet sits on its middle layer.  The finger holes on each end aid in lifting this level out of the box. 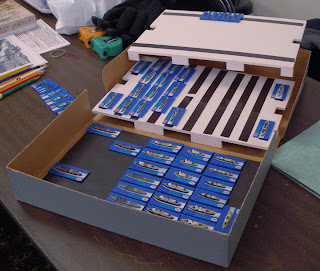 All three levels of the fleet anchorage.
Posted by ColCampbell50 at 8:26 AM

What "base size" are you using for your various ship classes?

Thanks for the info (and the email too).

By the way, how thick are your bases?

Just wanted to let you know I have been lurking since Jeff posted your link on the Naval Thunder forum.

Great stuff all around, you have inspired me to do all the ships for the battle and not just the capital ships. I am going to limit it at the ships actually in the scenarios though (for now) ;)

Like Jeff, you are costing me some money, but I am really enjoying learning the actual history of these engagements vs. the glossed over basics I knew before.

So what is your next project? ;)

These are great. I also have all these from Panzerschiffe.