Bluebear Jeff had asked some time ago for some pictures of some of my small collection of Panzerschiffe pre-dreadnought ships.  I am finally able to oblige him (and others).  These ships were purchased from another gamer who had the Russian and Japanese fleets for the Tsu-Shima Campaign as well as a number of others.  These pictures are just a sample of the two fleets.  The paint jobs are by the previous owner.  I re-mounted a few of the ships onto metal bases but left almost all on the original cardstock bases.  To a few I've added identification labels, depending on the previous owner's identification data on the bottom of the bases.

Panzerschiffe is an American company that has 1:2400 ships.  Their web site is:  www.panzerschiffe.com/

Please click on the pictures for a larger image. 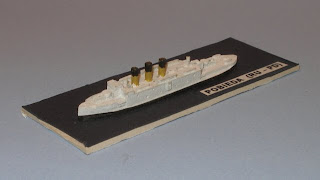 The first ship is the Russian battleship Pobieda (others in class are Peresviet and Oslyabya).
Number A301 in the Panzerschiffe catalog. 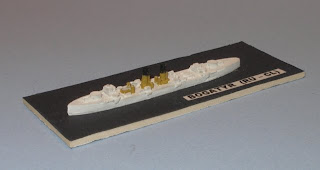 Russian light/protected cruiser Pallada, A304 (others in class are Diana and Aurora) 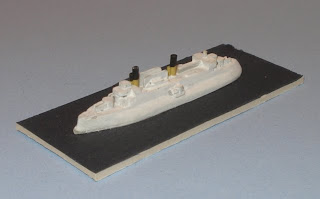 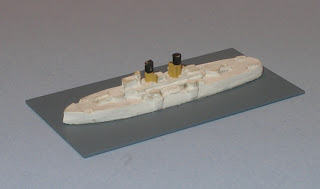 Russian battleship Petropavlovsk, L329 (others in class are: Sevastopol and Poltava)
These Russian ships were based either in Vladivostok (Bogatyr) or Port Arthur. 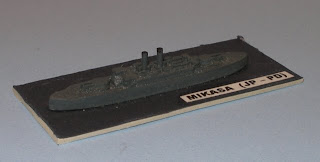 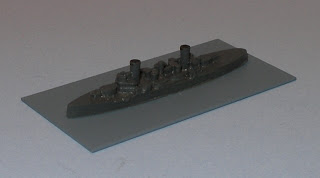 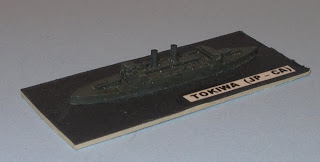 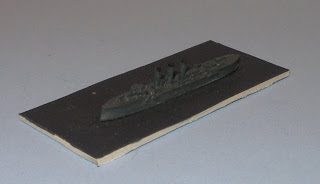 This Japanese light/protected cruiser is a little mystery.  The previous owner labeled the bottom of the base Otowa. L337.  But according to the Panzerschiffe catalog, the Otowa is L369, while L337 are the Tsushima and Niitaka.  I looked up pictures of both on the Internet but couldn't really tell which was which.  Anyway, this is an example of a Japanese light or protected cruiser. 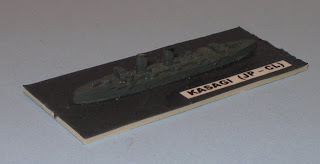 Japanese light/protected cruiser Kasagi, L339 (sisters are: Chitose and Takasago)
These Japanese ships were all in Admiral Togo's fleet at Tsu-Shima. 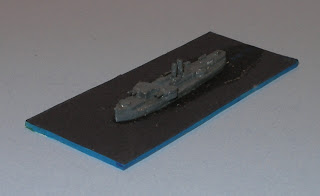 The Chinese battleship Chen-Yuan, L360.  She was captured in the Sino-Japanese War and taken into Japanese service, being renamed Chin-Yen (which is the Japanese equivalent of her Chinese name). 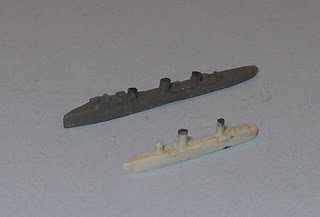 A couple of "little boys."  The rather crudely written labels on the bottom of each ship indicate the larger (gray) one may be the Spanish Furor class destroyer, D307, while the smaller (white) one may be the American Ericcson class torpedo boat, D302.  But that identification is not certain.  They are however examples of torpedo boat destroyers and torpedo boats of the period. 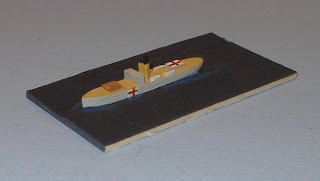 Finally a merchant ship, painted as the Russian hospital ship Orel which accompanied the Russian Baltic Fleet on its long cruise to oblivion in 1905.  Actually she is the American cargo ship Zafiro, L313, from the Spanish American War, but serves as an example of Panzerschiffe's merchant ships.
You can see examples of these and other Panzerschiffe ships in actual wargames at the following links.  The ships belong to either me or my wargaming buddy, Lord Sterling.
Remember the Maine and to He** with Spain!
Play Test of Sides of Steel Rules
Posted by ColCampbell50 at 2:31 PM

Thanks, Jim. I find the dark gray ships rather difficult to see. I am therefor going to paint my pre-Dreads in their pre-war or build-up to war colors.

JAPAN will have Black hulls & funnels; a Straw-colored deck; and White turrets and upperworks.

RUSSIA will have Dark Cinnamon hulls (could also be White, but I'm saving white hulls for the US); Light Wood decks; Ochre upperworks and most of funnels; Black for turrets and the top 25% of the funnels.

The above are pretty much from the WTJ website . . . with a few minor adjustments since I want each country to be visually cohesive and identifiable.

DDs and TBs were often a different color than their main fleet brethren (frequently "bottle green"), but I will keep mine consistent with main fleet colors.

I have the 12 main Yellow Sea ships coming from Panzerschiffe in 1/2400; and in 1/3000 the seven main cruisers from Ulsan coming from WTJ . . . so I'll find out if my old eyes can see either scale.

Thanks again for posting those, Jim.

I agree with your comments about the Japanese ship color. Of course for lessening at sea visibility by the enemy, that was a good color. But for us "old guys" it is too monochrome. When I get around to finally working with these ships (in the early fall I hope), I'll be using a different color scheme, probably what you have listed.