Today I treated our wargames group to a naval game in the Mediterranean in the 1500s. A small fleet of Christian galleys engaged a small fleet of Moslem galleys. We used the WizKids Pirates of the Barbary Coast "snap together" galleys, suitably painted and marked to differentiate the two sides.

This first picture shows the initial clash between the two Genoan squadrons and an Algerian squadron supported by an Ottoman squadron. 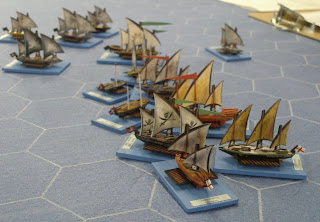 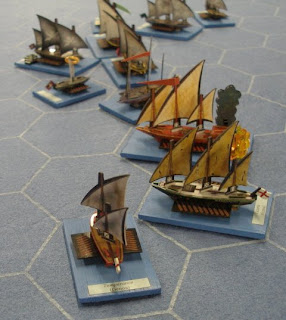 The rules we used are called Barbarossa and can be found under the Renaissance section on the Free Wargame Rules web site ( www.freewargamesrules.co.uk ).
Posted by ColCampbell50 at 3:53 PM

Nice to see a sight dedicated to naval warfare...Bill

Is there an url from which one can order these "snap together" ships?
:)
A