My last post was a look at a selection of the 1:2400 scale Japanese and Russian ships that I have.  I'm now scheduled to run two games (Nov & Dec) for our group using the ships.  But as you will recall from the previous post, most of them were still on the cardboard bases from the previous owner.  Now I have done some experimenting and have decided on a basing scheme for the ships.

Note:  All ships pictured here are from Panzerschiffe Miniatures and the numbers in parentheses are their stock numbers.  Also, please click on the pictures for a larger image.

By war gaming buddy, Lord Sterling, has already based his American and Spanish 1:2400 ships so I will follow his base dimensions since I will be using the same rules as he did for his "Remember the Maine and to Hell with Spain" game back in July (battle report of play test).

An example of Lord Sterling's basing, here with the USS Iowa (L-304)
The dimensions are 60mm x 30mm for battleships and cruisers and 40mm x 15mm for destroyers and torpedo boats.  Last weekend I cut up a plastic sign into bases of the two sizes.  I went ahead and spray painted several of the bases with a blue semi-matte spray paint that I had and several with Krylon Fusion black spray paint for plastic, which is really glossy.

But I continued my search for an effective way of representing the ocean and its waves and discovered a tutorial on the web for developing a water effects "picture."  This is what it looks like: 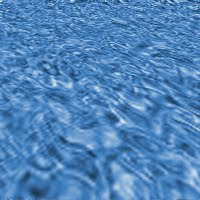 And the link to the tutorial is:
http://www.permadi.com/tutorial/sea/index.html
I copied this image and imported it into a Word Table scheme with 60x30mm and 40x15mm (or as close as I could get using inches) cells.  I will cut the cells apart and glue them to the plastic bases.
But before I did all that, I tried a couple of ships on the standard blue bases: 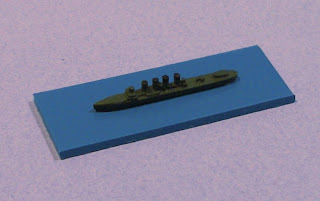 This is a Russian Revy-class torpedo boat destroyer (D-311) 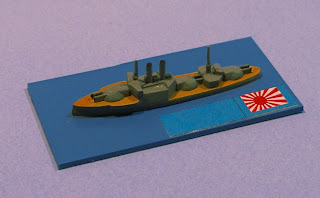 This is a German Brandenburg-class battleship (L-134) with a generic ship label.
As you can see, the bases, even without any wake painted on, look rather blah.  So I then experimented with the "sea effects" base: 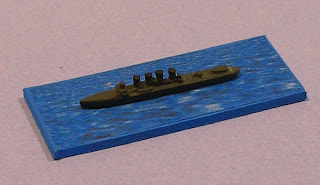 Here is a Revy-class TBD on the enhanced "sea effects" base.  Looks much better!
I tried a larger ship by using the Japanese armored cruiser Yakumo (L-332). 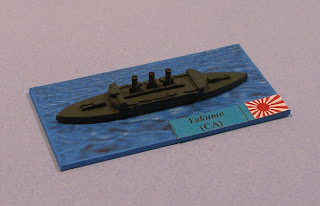 Here is the Yakumo in the dark grey painting scheme of the previous owner.
The ship identification label was also made using Word Table with the addition of a Japanese naval ensign.
But I thought that was too dark even though it may have been the accurate war-time paint scheme.  So I repainted her with lighter grey hull, superstructure, and turrets and a "sandstone" color for the decks.

This is, to my eye, much better and allows one to see the various turrets and the superstructure of the ship.

Then I added a wake using "antique white" mixed with a texture base to give the wake some added dimension. 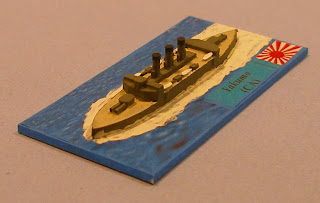 I still have a little touch-up to do (especially around the bow).  I will also apply a matte glaze to provide protection for the paint job.
As you can see, I think the addition of the "sea effects" layer to the base dramatically improves the overall look of the ships.  These ships are small.  The Yakuma is less than 2" long.  I had to use my magnifying glass built into one of my painting area lamps and a 10/0 brush to apply the colors.  Over the coming weeks and months leading up to my first game (Nov. 6) I will be basing and repainting the Russian and Japanese ships involved in the Battle of the Yellow Sea, Aug 10, 1905.
Posted by ColCampbell50 at 11:12 AM

Thank you for publishing this article.

I also have now received an order from Panzerschiffe . . . and although I've yet to paint them, I do plan on using "pre-war" paint schemes not only for visibility, but also for ease of differentiating the two fleets.

A couple of thoughts on your labels . . . I plan on doing something somewhat similar with the names, except that I plan on printing them in white (rather than black) for visibility. Also, to ease the differentiation between Armored and Protected cruisers, instead of using CA & CP, which could be confused, I'll use the older AC for the armored cruisers . . . but then I'm sometimes a bit of a maverick.

PS, Thanks for the email alert.