Things have been quiet on the naval front at Col Campbell's Barracks, but a post on the Miniatures Page about the construction of a river gunboat brought back my memories of building some myself.

Back in the 1990s, Wargames Foundry had plans for a river gunboat available on-line.  I downloaded the plans and used them to construct two sternwheel boats, one for me and one for my buddy, Lord Sterling. 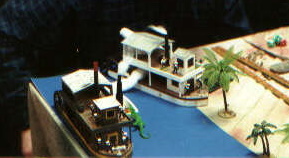 They turned out well and served us in our "Green Nile" campaign back in the early 2000s.  Mine has seen action several times since then.

In addition, I built a screw gunboat to add to the riverine force's combat power.  It was entirely "freehand" built. 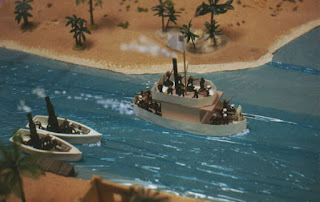 The two smaller steam launches were made from some wooden rowboats purchased from Michael's and finished with homemade boilers.