It has been a long time since I made a naval post here.  Lately the Jackson Gamers have been assisting David Manley and Stuart Machin of Long Face Games in play testing their latest naval rules.  They have developed "Si Vis Pacem" for quick play WW1 naval gaming, subtitling it "How you can play Jutland in a day."

Here is a report on our final play testing with a brief description of the action, some pictures, and a few comments about the rules.

We used Lord Sterling's 1:6000 scale WW1 ships, which are based on the "Jutland" board game counters.  If you'll remember, we used them back in 2016 to do a re-enactment of Jutland, using Avalon Hill's "Jutland" rules.

Based on the situation of 31 May 1916 (first day of Jutland), the British battlecruiser squadrons, reinforced by the 5th Battle Squadron, are out hunting for Germans. And the Germans are there, but more than VAdm Beatty was led to believe. VAdm Scheer and VAdm Hipper had planned a surprise consolidating the 1st Scouting Group with the 3rd Battle Squadron. The British had 4 super-dreadnoughts and 6 battlecruisers versus the Germans 8 super-dreadnoughts and 5 battlecruisers.

As the opponents spotted each other at 26,000 yards, each force immediately started closing. Soon large caliber shells were raining down on the "steel castles." But the lighter British battlecruisers were at a disadvantage, soon sustaining heavy damage to all and having two blown apart. But the Germans didn't escape unscathed, having several ships sustain heavy damage and several more medium damage. The British battleships also sustained some damage to all four.

Smoke sighted on the horizon behind both fleets had the commanders looking over their shoulders wondering if it was friends or more foes. The three battle squadrons of the British Home Fleet were advancing in a long line from the northeast while the British 3rd Battlecruiser, 1st Cruiser, and 2nd Cruiser Squadrons were approaching from the northeast. The lead British battleships (2nd Battle Squadron) soon made their impact felt by firing on the German 6th Division/3rd Battle Squadron, which included SMS Friedrich der Grosse, Scheer's flagship. Knowing that his fleet was now outnumbered, Scheer decided to call it a day. He had destroyed two British battlecruisers and heavily damaged four more, plus damaged four British battleships. He had averted the Kaiser's displeasure by not loosing any ships, only having four battleships and one battlecruiser damaged.

Photographs (from a high flying Zeppelin) 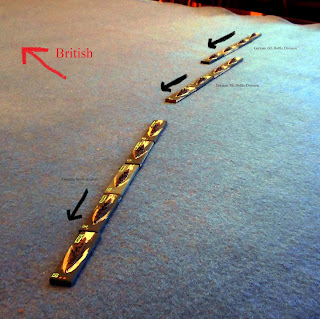 With the 1st Scouting Group in the lead, the German 5th and 6th Battle Squadrons sail towards the southeast, hoping to lead the lead the British into an ambush. 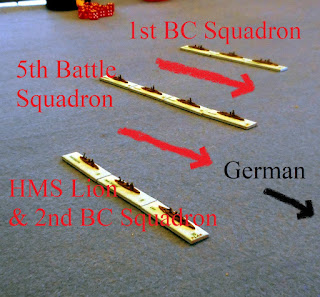 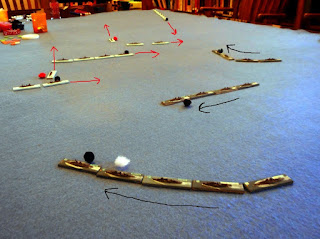 Later in the action the German 6th Battle Division turns towards the approaching British battleships, the 5th Battle Division and the battlecruisers try to get around the rear of their British opponents. In the background, the British 1st Battlecruiser Squadron has had one ship heavily damaged, leaving the line, while the same has happened to HMS Lion (Beatty's flag ship) in the foreground. In the far background the British Home Fleet sails closer, with the lead, HMS George V, sustaining medium damage which she returned in kind on the SMS Friedrich der Grosse (Scheer's flag ship). 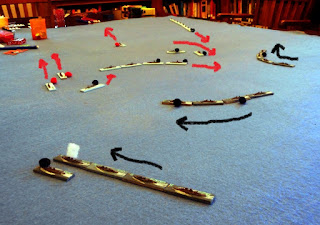 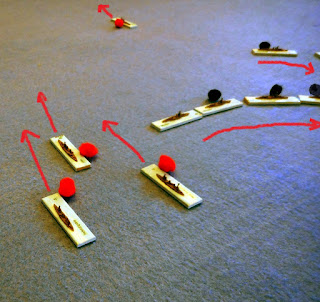 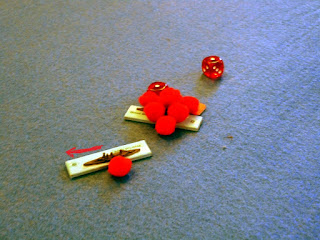 When your defense factor is a one and you roll a one under fire from a German battleship who has crossed your T, just about any German roll will result in destruction. Here HMS Queen Mary blows up as the heavily damaged HMS Princess Royal flees. 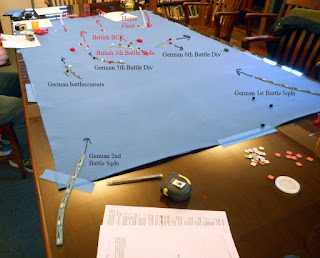 Final shot of the battlefield when VAdm Scheer made his decision to withdraw and declare victory. With 16 battleships of the Home Fleet closing, Scheer really had no other choice.

Comments on the Rules

"Si Vis Pacem" is a quick playing rule set that is both simple and complex.  It is easy to pick up on the rule basics and a player can function without too much guidance after the first round of firing.  Who moves first or second is decided by the side with the initiative while firing is done sequentially with the player having initiative firing a unit of ships first, then the second player firing, then back to the first player.  Torpedo attacks are done the same way after all gunfire which allows ships being attacked to fire at their attackers, potentially driving them away.

There are advanced rules and campaign rules we didn't try, just concentrating on the basics.  The advanced rules add some additional flavor and complexity to the basics, but not enough to take away from the playability of the rules.  Based on what I've read in David Manley's pre-dreadnought "Broadside and Salvo," the campaign rules will allow one to fight their own actions in the North Sea between the British Home Fleet and the German High Seas Fleet.

We are looking forward to the release of "Si Vis Pacem" later this spring and to more WW1 naval games in the future.

Thank you for the nice article here. Really nice and keep update to explore more gaming tips and ideas.

Very useful post and I think it is rather easy to see from the other comments as well that this post is well written and useful.Keep up the good work
software testing companies
QA testing services
software testing and quality assurance services