Some time ago I acquired an 18th Century American row galley (the Old Glory Shipyard GG9, Washington, from Benedict Arnold's flotilla on Lake Champlain).  I've finally begun painting her for an upcoming Capitania General de Florida game where she'll play a role as a Britannian ship in the naval part of the battle.  I've primed the galley and have painted both of the sides.  This might not have been anything close to what the Washington was actually painted, but it suits me (he says with a big grin!).   [As usual, please click on the pictures for a larger version.] 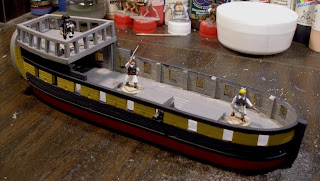 The row galley Washington with a few older MiniFig crewman aboard for perspective.  The lower part of the hull is red while the upper sides are charcoal and yellow ochre.  I think that the quarterdeck railings will also be yellow ochre, while the deck will be a light wood color (to represent holystoned decking) and the interior of the sides may be red. 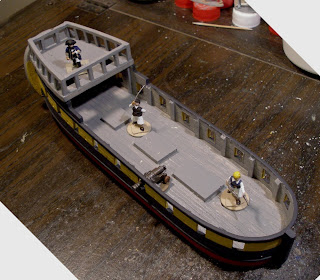 And here is an overhead view.  She came with two masts (the two crewmen happen to be standing over the holes in the deck) and yards.  Her rig on Lake Champlain was lateen sails on both masts.  I am going to try that arrangement.  The yards are each in two pieces so I'll have to "fish" them together.  I have a clamp device that my nephew gave me several Christmases ago which will come in handy to hold the two halves while I wrap glue soaked thread around them.  I have a good drawing of the galley in a book on American Revolution navies that shows how they would have been attached and hung on the mast.
More pictures later as work on her progresses.
Posted by ColCampbell50 at 9:58 AM